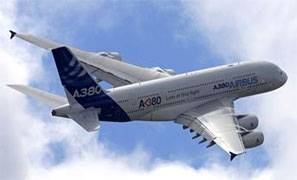 India's domestic air traffic is set to grow at the "fastest rate" of 10 per cent against the global average of about five per cent in the next two decades, triggering a demand for over 29,000 additional planes across the world, aircraft manufacturer Airbus said on Tuesday.

Air travel till 2032 will be fuelled by traffic to and from emerging markets like India, Brazil and China, and world air traffic will grow at 4.7 per cent annually, requiring 29,220 new passenger and freighter aircraft valued at nearly $4.4 trillion.

In its latest Global Market Forecast for the next 20 years (2013-2032), Airbus said: "Domestic flows are set to rise strongly, with domestic India growing at the fastest rate (nearly 10 per cent), followed by China and Brazil (seven per cent)."

The forecast said that "by 2032, Asia-Pacific will lead the world in traffic overtaking Europe and North America".

"Today on average, a fifth of the population of the emerging markets take a flight annually and by 2032, this will swell to two-thirds," the major aircraft firm said.

Overall, with an above world average traffic growth rate of 5.5 per cent, Asia-Pacific will account for 36 per cent of all new passenger aircraft demand, followed by Europe (20 per cent) and North America (19 per cent), it said.

He said that in the very large aircraft market, dominated by super jumbo A-380, there is a requirement for 1,334 passenger aircraft valued at $519 billion.

"Of these, 47 per cent will be needed in the Asia-Pacific region, followed by the Middle East (26 per cent) and then Europe (16 per cent). Asia-Pacific's requirement for the A-380 is demonstrated by the region's growth in middle classes which is set to quadruple in Asia-Pacific in 20 years," Leahy said.