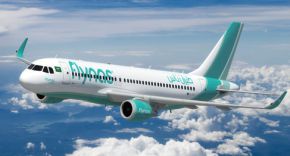 Flynas, a budget airline from Saudi Arabia, will begin operations to India, with two weekly flights from next month.

According to a statement issued today by Bizpros Management, the official passenger sales agent for Flynas in India, Telangana Chief Minister K Chandrasekhar Rao is expected to preside over the inaugural function of the airline's Indian operations in Hyderabad.

Bizpros Management Managing Director Sajid Hazari said that the launch of flights to destinations in India is an exciting new development in the Flynas Global Flights programme.

"I am sure it will be welcomed by a huge number of Indian expatriates who work in the Kingdom of Saudi Arabia.

We keenly look forward to extending Flynas' hospitality to our guests on board flights from Jeddah to both Hyderabad and Calicut," Hazari said.

Flynas is a low-cost carrier with a fleet of 27 aircraft which includes the recently introduced wide-bodied Airbus A330.

The airline operates nearly 950 weekly flights on 28 destinations within and outside of Saudi Arabia.